Writing to his brother in the summer of 1824, the essayist Thomas Carlyle described Birmingham as a ‘pitiful’ town: ‘a mean congerie of bricks … streets ill-built and ill-paved … torrents of thick smoke issuing from a thousand funnels’.

By the 1860s, little had been done to alleviate the squalor in which Carlyle’s ‘sooty artisans’ and their families lived and worked. The system of civic administration was largely ineffective in coping with a population of some 340,000 crammed into a warren of workshops and dwellings covering some five square miles.

The town council was in the hands of what has been called a ‘shopocracy’: men of an unprogressive tradesmen class who, whilst worthy in their way, lacked ideas and were filled with alarm at the prospect of large-scale spending. Indeed, between 1853 and 1858, council expenditure decreased by a third.

However, during this sterile period of local administration, the seeds of a new civic philosophy began to take root. This was known as the ‘civic gospel’, and responsibility for the development and implementation of the civic gospel in Birmingham lay in the hands of a closely linked triumvirate of non-conformist preachers, local politicians, and artists and architects.

In Shakespeare, Birmingham, Everything to Everybody, Ewan Fernie, George Dawson, 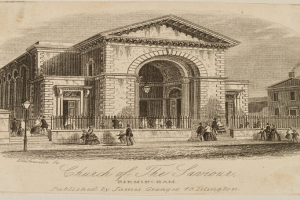 George Dawson and the Civic Gospellers