'The Only Prize Medal for Cut Nails'

Many Birmingham industrialists entered exhibits for the Great Exhibition, though not all achieved the recognition they sought.

One manufacturer who did, however, was John Reynolds, a maker of machine-cut nails at a small factory in Aston’s Newtown Row. Awarded the only Prize Medal for his exhibit, Reynolds constantly reminded both competitors and customers alike of his unique achievement.

Birmingham! The very name has a metallic ring!’ So wrote a somewhat over-imaginative sketch writer in an 1863 edition of the Birmingham Daily Post. Over-imaginative he might have been, yet nineteenth-century Birmingham was, of course, the ‘city of a thousand trades’, and many of those trades were occupied with the manufacture of metal products: products ranging from buttons to bayonets, pen nibs to police whistles and candlesticks to cut nails.

Whilst the candlesticks produced in Birmingham were often items of exquisite craftsmanship, the same could hardly be said about the many millions of nails that were produced weekly in Birmingham’s steam-powered nail manufactories from the 1840s onwards. 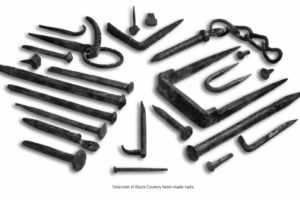